The Iranian Hybrid Warfare Operations in the Middle East 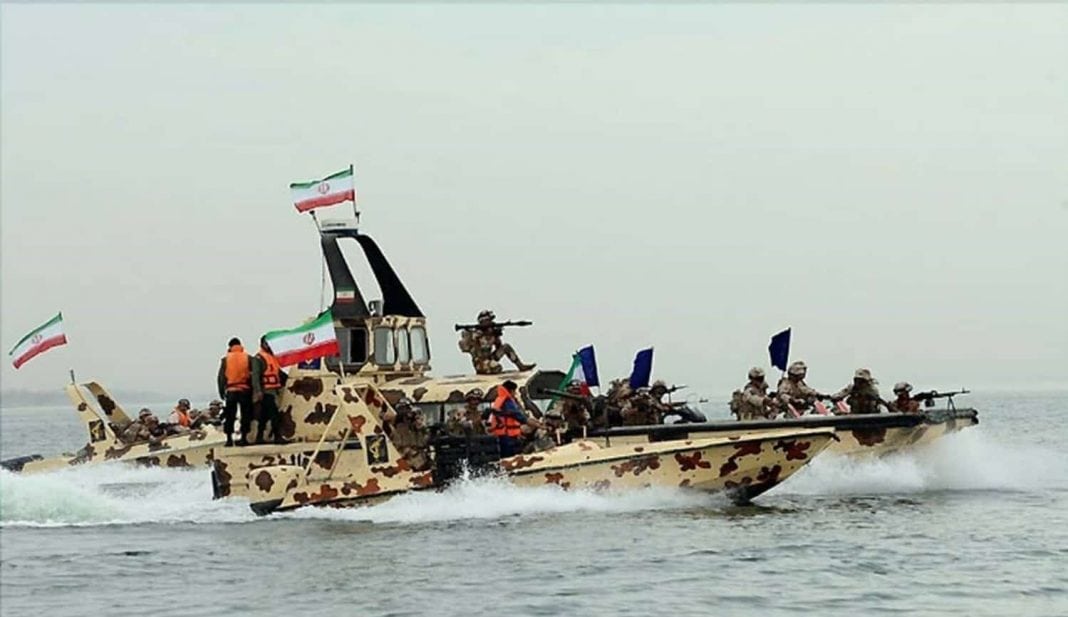 Iran is applying hybrid warfare operations in the Middle East to advance its final goals and discourage a West intervention in the region.

KJ-1.    It is highly likely that Iran will keep targeting Saudi and Israeli energy companies and government entities, disrupting the power balance in the region. By doing this, Iran will also pressure the United States to decrease the economic sanctions imposed on the country.

KJ-2.    It is highly likely that Iran will try to influence the next presidential election in Iraq in October 2021. Its final aim is to regain its strong presence in the neighbouring country.

On the 3rd of August 2021, Sayyid Ebrahim Raisolsadati, also known as Ebrahim Raisi, became the new president of the Islamic Republic of Iran, putting an end to Hassan Rouhani’s presidency.

Raisi, who held various posts in the Iranian judicial system since the Islamic Revolution in 1979, won the presidential election with only 17.9 million votes, due to the low turnout.

Raisi inherited a country affected by poverty and healthcare and economic crisis. Iran is also exacerbated by the international sanctions, first introduced in 1979.

Official relationships between Iran and Saudi Arabia (KSA) were cut in 2016, when the Saudi embassy in Iran was attacked, following the execution of a Shia cleric on behalf of Saudi Arabia.

Moreover, KSA opposes the Joint Comprehensive Plan of Action (JCPOA), the nuclear deal between the US and Iran, which is deeply affecting the Iranian economy.

Iran is trying to expand its influence and power within the Middle East region. In 2021, it signed two cooperation agreements, respectively with Russia and China.

In January 2021, Iran and Russia signed a cooperation agreement on information and communications technology (ICT) and cybersecurity. Defence capabilities and the sharing of information are at the centre of this cooperation.

In March 2021, China and Iran signed the Joint Comprehensive Strategic Partnership between the Islamic Republic of Iran and the People’s Republic of China. This 25-year cooperation will strengthen their economic and political alliance. From the security point of view, the two countries will share intelligence and increase their defence and military cooperation.

Since 2019, the Iranian Navy and its proxies, such as the Houthis, are implementing hybrid warfare operations against KSA and Israel. They are conducting attacks against Saudi and Israeli infrastructures using small boats to seize and attack other vessels, and naval ships to hinder oil tankers.

In May 2019, more than half of the oil production of Saudi Arabia was taken offline for some weeks, due to the various drone attacks on the main production facility in the country.

Iran exploits its capabilities in the cyber realm to commit theft of intellectual property and to target energy supplies in the Gulf and the US.

Since 2015, Iranian companies were able to hack into international companies and governments, and steal a huge amount of data. In 2020, Mabna Institute managed to exfiltrate more than 31 terabytes of intellectual property and data from universities and various governmental entities, such as the US Department of Labor, and the State of Hawaii.

Mabna Institute is a private government contractor that operates on behalf of the Iranian Islamic Revolutionary Guard Corps (IRGC).

On the 7th of March 2021, Yemen’s Houthi rebels, supported by Iran, attacked with ballistic missiles, and explosive-laden drones the Ras Tanura port, an oil port in Saudi Arabia, and the city of Dhahran, where one of the residential compounds of Saudi Aramco is located.

According to the Houthis military spokesman, Brigadier Yahya Sareea, the militia group is targeting Saudi Arabia and its oil facilities because of its role in the Yemeni war.

As part of its hybrid warfare operations, Iran is targeting Saudi Arabia and its oil tankers in the region. This is a reaction to how Donald Trump dealt with the Iranian sanctions and regain regional supremacy.

By attacking the Saudi oil facilities, Iran is causing the rising of oil prices. Consequently, this could put pressure on the United States to relax the sanctions. Since 2015, when the US withdrew from the JCPOA, Iran has lost in oil export revenues more than $120 billion.

Between April and July 2020, Iran targeted Israeli many water facilities. Their malfunctions caused irregularities and unplanned changes in data.

On the 29th of July 2021, a suicide drone attacked an oil tanker run by Zodiac Maritime, an Israeli company, off the shores of Oman. Both the US and the UK accused the Iranian government of being responsible for the act.

This attack fit the pattern of past offensives carried out between Iran and Israel. Since 2019, more than 150 attacks have occurred in the eastern Mediterranean coast, the Red Sea and Gulf waters. Israel as well targeted ships headed to Syria, carrying Iranian military supplies and oil.

In the last years, Iran built a drone army and sent them and their technology to Iraq, Syria, and Yemen. Iranian leaders stated more than once that Israel should “be wiped from the map”. Iran, with its drone army and missile forces, poses a real threat to Israel.

These methods and strategies implemented by Iran are part of Iran’s hybrid warfare operations. Thanks to its new agreement with Russia, Iran was able to take a cue from Russian strategies and apply them. The same methods that Russia employed in Ukraine, are now applied by the Iranian government against KSA and Israel. In order to advance its final goals and discourage a West intervention, Iran is using hybrid warfare operations.

It is highly likely that Iran will keep targeting Saudi and Israeli energy companies and government entities, disrupting the power balance in the region. By doing this, Iran will also pressure the United States to decrease the economic sanctions imposed on the country.

Raisi’s goals in Iraq are to cement Iranian influence and hinder any Iraqi attempt to find new economic partners. Raisi is aiming at isolating Iraq from the West, and especially from the US.

Moreover, with the IRGC’s help, which can increase the military and political pressure on the US, Raisi will try to expedite the eviction of the US forces from Iraq. Once again, in order to regain trust and influence in Iraq, Iran applied hybrid warfare operations in the neighbouring country.

Iraq and its territories are significant for Iran. The latter would like to keep its predominance on the Shia population, which constitutes 60% of the whole country. In the last three years and since the Iraqi liberation from ISIS, Iran lost influence in the neighbouring country.

If in 2016 the 70% of the Iraqi Shia population was favourable to Iran influence, in 2019 was only 15%. The increase of illegal drugs coming from Iran to Iraq caused hostility against Iran. Secondly, the economic crisis in Iran negatively impacted the Iraqi one.

Many Iraqi companies had to shut down because they were not able to compete against the Iranian prices. These were below market price, due to the open-door policy applied by the Iraqi government towards Iranian products.

With Raisi in charge, the Quds Force and the IRGC will try to regain the lost control over Iraq. After the overthrown of the Ba’athist regime, Shia politicians supported the formation of Shia militias. These were then advised and armed by the IRGC. Iran provided these militias with short-range ballistic missiles, drones, and sophisticated rockets, which can undermine the US presence in Iraq.

The various attacks that hit the United States were also a way to avenge the death of Qasem Soleimani, IRGC-Quds Force former commander. Soleimani was killed by a strike ordered by the Trump administration in January 2020.

Iraqi Shia militias backed by Iran keep targeting US military bases in Iraq. The US arrived in the country in 2019 to help Iraq fight against the Islamic State. These militias, whose commanders are also part of the Iraqi government are targeting the 2,500 American military personnel. Iraq is at the centre of the conflict between Iran and the US, which intensified after the US withdrew from the JCPOA.

In October 2021, the parliamentary elections will take place in Iraq and, consequently, the election of the President and the Prime Minister.

The current Prime Minister, Mustafa al-Kadhimi always tried to curb the Iranian influence in Iraq. He also gave some of the most important security positions within the government to commanders that were not pro-Iran.

This political approach can only be maintained if the international arena will exert pressure on Iran and will find an agreement on the JCPOA.

Moqtada al-Sadr, a prominent political figure, decided not to take part in the October elections, withdrawing his support from the government and distancing himself from it. Sadr is opposed to the American presence in Iraq and does not want Iraq to be influenced by Iran. According to Reuters, Sadr decided to withdraw his candidacy due to an Iran-backed Shi’ite groups campaign aimed to blacken Sadr’s and his movement reputation.

Even though Sadr withdrew from the elections, he did not dismantle the Sadrist Movement, which could maintain some seats in the parliament. Sadr represents a threat for Iran and its militias, which now have more chances to install their influence in Iraq.

It is highly likely that Iran will try to influence the next presidential election in Iraq in October 2021. Its final aim is to regain its strong presence in the neighbouring country.