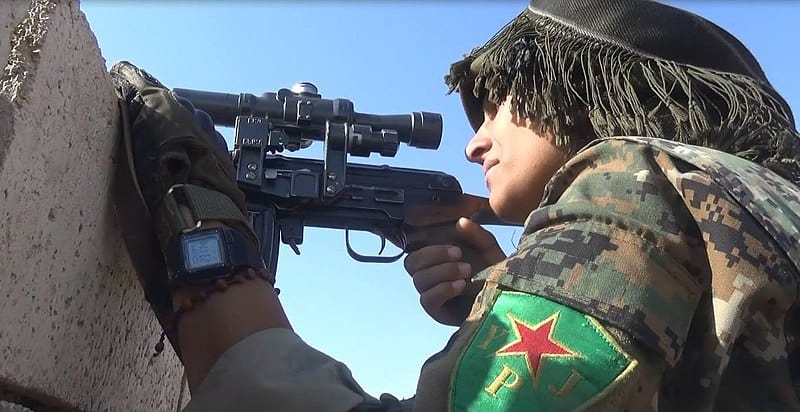 The Women’s Protection Units is mainly based in Syria, and it is an all-women Kurdish military faction formed in 2013. The aim was to defend the Kurdish population from the attacks of ISIS, the al-Nusra Front, and the Syrian regime.

In 2011 the Syrian civil war broke out and the Kurds population was ready to face the regime of Bashar al-Assad. Not only did the Assad regime not recognise the Kurds’ independence, it also restricted the role of women in society.

In 2012, the Kurds managed to control Rojava, an autonomous region located in north-eastern Syria, despite the rise of ISIS.

The Women’s Protection Unit (YPJ) was founded on the 4th of April 2013. It is the female faction of the YPG, People’s Protection Units. The YPJ, like the YPG, is part of the Syrian Democratic Forces (SDF), the armed forces of Rojava.

Women were involved in the fight before 2013, but only in that year, an all-female brigade was formed. Jindires, a town in Northern Syria, hosted the first female brigade. It then expanded its activities and fights towards the cantons of Jazira and Kobane.

The YPG often stated that one of their main goals is that there is equality between men and women. One of the reasons why women were joining the unit was to change the stereotypes behind the figure of the woman in their culture.

Until the last century, Kurdish women did not have a name. They were called “the daughter of” or “the wife of”, they did not have their own identity. Later, with the foundation of the Kurdistan Workers’ Party (PKK), the role of women within society started changing. In 2019, the Autonomous Administration of North and East Syria (AANES) promoted a series of laws in order to protect women rights, such as banning child marriages and “honour” killings.

“The idea that women were inferior started at school. I had classes on how to please a husband, how to look beautiful, the proper way to comb my hair”. She also added that “Assad was telling us that the only future we could hope for was to get married and have children.”

One of the first obstacles that YPJ encountered was to educate men to treat women the same.

Structure of the Women’s Protection Units

Since its formation, the Women’s Protection Units grew in numbers. All the women part of the YPG automatically became part of the new battalion. In the beginning, there was just one battalion per canton. But then, since more women decided to join the fight, the YPJ established more battalions.

The YPJ women are volunteers, they do not receive a salary and they do not sign any type of contract. They remain part of YPJ out of loyalty, and they are free to leave whenever they want. Even though there is not a written agreement, women are strongly discouraged to use phones and social media and embark on romantic relationships. This is mainly not to lose the focus on day-to-day life.

The YPJ then decided, after the many losses in the fights of 2017, that married women cannot join the faction.

In 2015, Nesrin Abdullah went to Italy. During an interview with Il Manifesto, an Italian newspaper, she stated

“We are not military, we are militants, we are not paid to make war, we are partisans of the revolution. We live with our people, we follow a philosophy, which is also a political project. At the same time, we are carrying out a gender struggle against the patriarchal system. The other militants are our comrades, we have both political and friendly relations with them.”

After the defeat of the Islamic State, the number decreased. Now only 5,000 women are part of the Women’s Protection Units.

Nonetheless, the number of fighters decreased, still many women are willing to join the fight. In the past two years, the Turkish government, which sees the Kurds as an existential threat, decided to launch various offensives in north-eastern Syria.

The women of YPJ are not only Syrian Kurds since Arabic and Yazidi women decided to join the fight. Western women as well joined YPJ during the years. Anna Campbell, from the United Kingdom, and the Canadian Hanna Bohman are just an example.

Due to its political alignment with the Kurdish Democratic Union Party (PYD), the YPJ bases its ideology on Abdullah Öcalan’s philosophy.

Öcalan is the founder and the leader of the PKK, founded in 1978. In 1999 the Turkish National Intelligence Agency (MIT) abducted him in Nairobi. The MIT then imprisoned him in the İmralı prison, in the Sea of Marmara, where he still is. While in prison he published many books in which he advocates jineology.

Jineology, or the science of women, is a form of gender equality that promotes liberal feminism. As Öcalan stated in Liberating life: Women’s Revolution,

He especially refers to the Kurds, which have to adhere to gender equality in order to be truly free.

The new YPJ members have to practise military tactics and study political theories for at least a month.

The training that these women receive is not only physical, but it also covers philosophy and the history of feminism. It has the goal to empower women and give them enough confidence to make their own decisions, without the men’s influence.

On the other hand, physical training focuses on tactical manoeuvres, weaponry, and fight. The YPJ opened various academies and training centres after 2017.

After receiving the training, the YPJ members rotate on the front lines every two weeks. At every observation point, there is a small group of women in order to control and secure the surrounding areas.

The Women’s Protection Units relies for food, funding, and any kind of supplies on the various local communities.

In 2014, during the Siege of Kobanî, both the YPJ and the YPG received 10 tons of medical supplies and 24 tons of small arms and ammunition. The US and the Kurdistan Regional Government in Iraq sent those 27 bundles in order to support them against the IS.

In 2020 a major scandal hit the Women’s Protection Units. The United Nations reported that both the YPJ and the YPG were recruiting child soldiers to fight their wars. According to the UN, the two factions were the ones with the biggest number of recruited children, which amounted to 283.

Back in 2014, the Kurdish factions made an agreement with Geneva Call in order to protect and ban children in armed conflict. Despite this agreement, the YPJ recruited more children under the age of 18 into their ranks.

Regarding female children and girls, their participation in the YPJ is often related to a difficult domestic situation or to escape a forced marriage.

Past Missions of the Women’s Protection Units

During the civil war in Syria, both the YPJ and the YPG took part in the fight against various groups located in northern Syria, such as the Islamic State.

In March 2014, the YPJ took part in the Siege of Kobanî, becoming a vital element in the defence of the region. The support of Western countries, such as the United States, only arrived after October 2014, when the US forces started coordinating airstrikes with the Kurdish factions.

One of their tactics during the battle against ISIS was to position YPJ fighters in urban areas, which ISIS fighters were not familiar with. Most of the YPJ women were born and raised in that area. Consequently, they knew the streets and had inside sources able to help and support them.

In January 2018, due to the withdrawal of the US troops from the Turkish and Syrian border, the Turkish government launched various airstrikes in Afrin Canton, a canton in Rojava, Syria. The Turkish government justified the attacks claiming that more than 700 cross-border incidents happened since the US troops left. Turkey witnessed only 26 attacks and lied about the number of incidents. During this operation, the so-called Operation Olive Branch, the YPJ factions took part in this fight, losing many of its members.

In August 2014, they took also part in a military operation at Mount Sinjar, Iraq. Their goal, alongside the YPG and the PKK one, was to rescue more than 10,000 Yazidis from genocide. After pushing out the Peshmerga from the area, the Islamic State militants threatened the Yazidis population, as it saw them as “a community of devil worshipers”. Once again, with the support of the US, they were able to create a safe zone for the Yazidis and then move them into Northern Syria.

The YPJ and its allies never stop their fight against the Islamic State. In 2017, they took part in the attacks against ISIS strongholds in Tabqa and Raqqa.

Their effectiveness against the Islamic State is not only due to their bravery and fighting skills but also to their being women. If an ISIS man gets killed by a woman, he cannot go to heaven, and consequently, his body is burned. On the other hand, if ISIS captures YPJ women, they will rape, kill and, most of the time, behead them.

The YPJ set the example for the creation of other all-female forces in Syria and the surrounding areas. In 2015, as an example, the Bethnahrain Women’s Protection Forces was formed.

In 2014, CNN also named “most inspiring women” the Kurdish fighters of the YPJ.

Since its formation, the YPJ has never stopped fighting against its enemies and for women’s rights in the region.