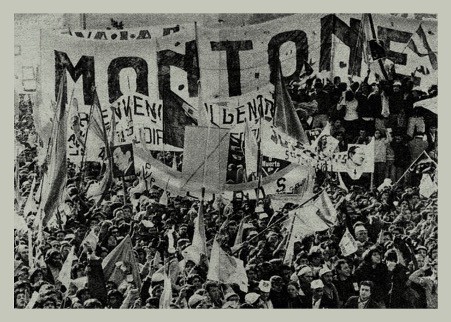 The Montoneros was a hybrid political-terrorist organisation that operated in the 1970s and 1980s in Argentina. With ideology as a driver, hierarchical structure with overt and covert capabilities suffered from a logistical change to a clandestine nature.

Why does this matter?

With Juan Domingo Peron in exile in Madrid in 1970, the Montoneros were born as a terrorist-insurgent organisation lobbying for Peron’s return to Argentina. The Montoneros achieved significant attacking and networking capabilities in the decade, considering their outlawing in 1975 and their loss of capabilities in 1976 with the arrival of Jorge Rafael Videla’s military dictatorship. The ideological driver of the group associated with Peronism highlights the trait of a political-terrorist hybrid organisation.

The concept of hybridity to define the Montoneros can and should be used as an attempt in defining Peronism. The complexity of the ideology, nicknamed the ‘third position’, points at separation from the right and left-wing currents during the Cold War. Consequently, the movement has been described as both right or left-wing, but populistic policies remain at the heart of the ideology. Considering the Montoneros a purely left-wing branch within the Peronist movement reduces the attention placed on kidnappings and violence. On the contrary, pointing to the violence, logistics, and terrorist nature fails to provide political and social context for the drivers of the Montoneros, leading to a hybrid political-terrorist organisation.

The dictatorship of Videla hampered Montonero’s capabilities at organising and targeting objectives. Attacks occurred on a smaller basis, while less visible actions like propaganda campaigns were introduced to project human rights violations carried out by Videla. A figure close to 30,000 disappearances which include torture, rape, and executions were carried out under the rule of the dictator. The rise and fall of the government in 1982 following the conflict in the Falklands did not have a direct effect on the Montoneros. The hybrid political-terrorist trait allowed the group to maintain a weak structure despite dropping financial support from the Castro regime.

The Montoneros:Tactics, Techniques and Procedures

Considering guerrilla warfare to be their specialty, the Montoneros had at their peak in 1973 a recruitment pool of 2,500 combatants with around 11,000 sympathisers. Counter Insurgency (COIN) and a focus on Montoneros weakened their capability in 1976, dropping the number of combatants to 300 within Argentina in 1977. Considering ideology to be a part driver of the terrorist organisation, support by Juan Peron’s government was likely crucial for the maintenance of capacities. The decision to outlaw the Montoneros likely pointed towards a lack of capability to function in a clandestine nature, as was seen by the split within Montoneros in 1979 of the political and military branch.

Training functioned through 3 processes where potential combatants were screened and trained. Sites of training included Argentina as well as Brazil, Cuba or Lebanon, highlighting the international network of Montoneros which became prominent under the leadership of Videla. While the concept of hybridity does explain the nature of the Montoneros, the particular training with Improvised Explosive Devices (IED) highlights the original shift from kidnappings and robberies to targeted organised attacks, increasing the military-clandestine role of the terrorist group.

Executions and kidnappings are the status quo of Montoneros’ methodologies in Argentina although the time frame provides a difference within methodologies. Until being outlawed in 1975, the organisation was lawful and managed to have a significant base of combatants. Aramburu, considered partly responsible for the fall of Peron in 1955, was kidnapped by 2 combatants dressed as armed forces personnel, and later executed after a mock trial.

According to a CIA report, a Buenos Aires businessman named Soldatti in 1979 was killed after his car was trapped while driving by other vehicles. After opening fire, his car exploded killing him and his driver. It is almost certain that Montoneros’ attacking methodologies were influenced by their context and overt support from the government. The organisation showed a degree of adaptation to insurgency tactics. Nevertheless, the hybrid political-terrorist organisation likely suggests that without a minimal degree of overt governmental support, the tactics employed would only alienate the group further from achieving political influence in Argentina.

One of the indicators that projects the importance Montoneros placed on attacking capabilities was its organisational structure and the division between Mexico and Cuba. In 1982, with the fall of the dictatorship, 60 combatants reportedly remained in Argentina compared to the 300 exiled. While the political branch was established in Mexico City, the intelligence, counterintelligence and ‘weapons and logistics’ branches were all established in La Havana. The Cuban capital acted as a springboard for the organisation to provide aid to other leftist militias or organisations like the Sandinistas or Costa Rican militias. While the hybrid political-terrorist component is significant and defines the multi-faceted nature of the organisation, a driver towards armed action highlights the violent nature under which the Montoneros approached each issue.

The political branch in Mexico established clandestine propaganda radios in Costa Rica and in Buenos Aires during the 1978 World Cup, with little visible effect. In comparison, the effectiveness of international networks provided the military branches with contacts outside the continent. The Palestinian Liberation Organisation (PLO) established contacts with the Montoneros in Beirut and Mozambique. The former for IED training courses and exercises, which several dozen Montoneros attended, while Mozambique in 1984 served as a liaison. Financially backed by Cuba until the Falklands, ideological rifts within the Montoneros created a separation. On one side, those seeking a lawful integration within the political system like leader Firmenich, exiled in Brazil until his extradition to Argentina in 1984. On the other side, those looking to continue the armed conflict like Cuba which was likely interested in maintaining a structure similar to a guerrilla network.

While Videla’s dictatorship cooperated with the United States, the complex nature of Argentina’s environment provided an opportunity for the Montoneros to create and use a hybrid political-terrorist organisational approach. Overt and covert functions covered both components of the profile of the Montoneros. While each branch operated and potentially sought to formally divide the organisation, eventually both violent and non-violent approaches were likely connected due to a similarity in origin and ultimate objective.