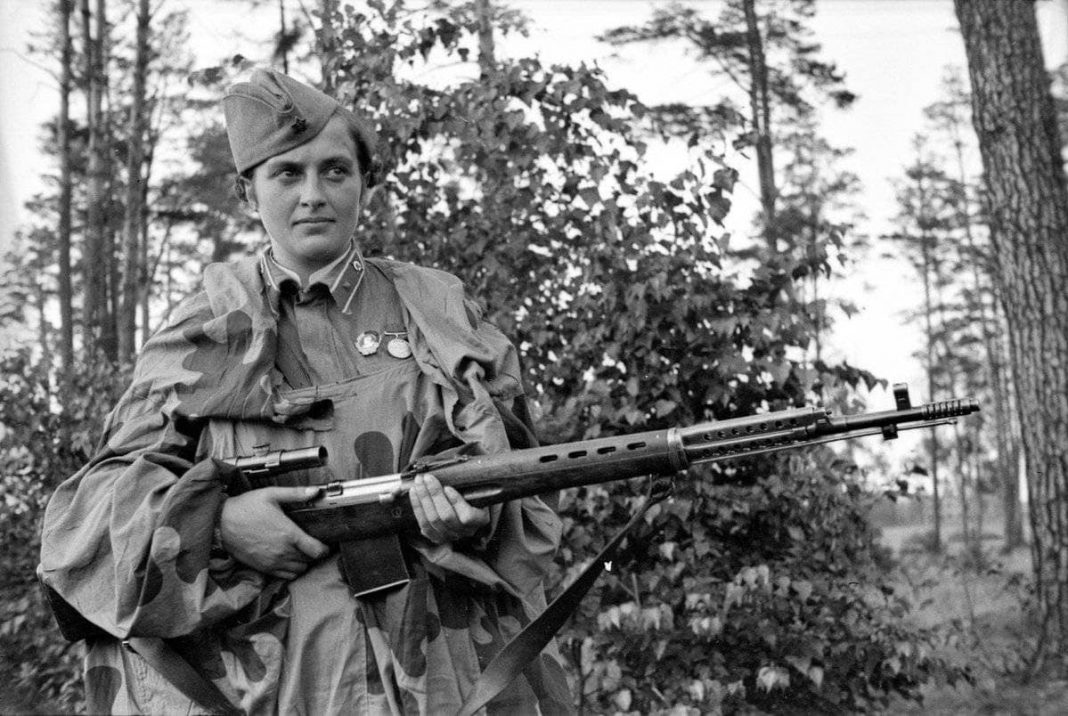 Born in Belaya Tserkva, a village near Kyiv, Ukraine, on the 12th of July 1916. Her father, Mikhail Ivanovich Belov, was a government employee, and her mother, Elena Trofimovna Belova, was a teacher.

“I am proud to wear the uniform of the legendary Red Army. It has been sacrificed by the blood of my comrades, who have fallen in combat with the Fascist. It bears the Order of Lenin, an award for military distinction. I wish you could experience a bombing raid. Honestly, you would immediately forget about the cut of your outfit.” These are the words of Lyudmila Pavlichenko during one of the many interviews questioning her outfit during her tour in the United States.

Since her young age, Pavlichenko never hid her shooting abilities, even though she probably did not know it would become her future. She was the leader of a gang of teenage boys because she was the best to shot with a catapult, was the best swimmer, could run very fast and was never scared of a fight.

After finishing nine years of schooling, Pavlichenko and her family moved to Kyiv, and there she started working in the Kyiv Arsenal Factory as a metal grinder. In 1930, at the age of 14, being tired of hearing the son of her neighbour gloating about his shooting skills, Pavlichenko decided to join a shooting club to prove that “girl could do as well”. It was with the TOZ-8 that her enthusiasm for rifle shooting was born. After her first session, her coach, Fyodor Kushchenko, was so impressed with her skills that he described her ability to use a rifle as an “inborn ability”.

At 16, Pavlichenko got married and gave birth to Rostislav, but the marriage did not last long. While her parents were taking care of her son, she decided to attend Kiev University to study history. Having the chance of joining the university was the fulfilment of her childhood dream. During her studies, she loved the classes of history of the USSR, Latin and English. During her second year, she felt the urge to train in shooting again, and she decided to attend the two-year course at the Osoaviakhim sniper school in Kiev. This course not only taught her how to shoot properly and the different kinds of rifles but also focused on theory classes. In 1939 she was able to graduate with excellent results, especially in practical shooting and firearms mechanics.

Lady Death and the Red Army

In June 1941, when Hitler’s forces invaded the Soviet Union, Pavlichenko left the university immediately to join the war and the day after the invasion she enlisted in the infantry. The first time she went to the enlistment office, the recruiter did not listen to her and registered Pavlichenko as a nurse. Not accepting being refused, the day after, she went back and convinced the registrar to sign her up as a sniper.

On the 24th of June 1941, all the recruits were sent to the front, and four days later the ceremony of swearing the military oath took place. On that occasion, her comrades never lost the chance of reminding her that she was a woman and that was not a place for her. But Comrade Captain Ivan Ivanovich Sergienko saw something in her and decided to give her a chance as a soldier, as a sniper. Pavlichenko’s war was not only against the Nazis but also against the preconceptions of women in the army and especially women being snipers.

The issue, at that time, was that there were not enough weapons for all the soldiers, and Pavlichenko was given a spade and a PGD-33 grenade. For her first weeks in the front, she kept waiting until one day one of her comrades was wounded and handed her his weapon, a standard Mosin rifle, 1891/1930 model. After some days, on the 8th of August 1941, her Comrade Captain gave her the chance to prove herself as a sniper and tasked her to kill two Romanians soldiers working with the Nazis. She hit the first man with the third shot and the second one on her fourth attempt. On that same day, she was finally accepted into the 25th Chapayev Rifle Division in the Red Army, and from this moment onwards, she proved to be the best female sniper in history.

In her first 75 days of the war, the so-called Lady Death killed 187 Nazis, and according to the Smithsonian reports, she duelled and killed a total of 36 enemy snipers. When the German soldiers became aware of her skills, they tried to bribe her by offering her chocolate and the promise of an officer position within the German army. When she denied their offer, the enemies threatened to tear her into 309 pieces, the number of her confirmed kills. At the age of 26, she was the deadliest female sniper in history, with 309 confirmed killings.

The Tour of the United States

In June 1942, during a fight against the Germans in Sevastopol, Pavlichenko got hit in the face by mortar shrapnel and she was withdrawn from the war. After her withdrawal, the Red Army assigned her to train young snipers and also gave her the role of wartime propagandist, which consisted of raising money and convincing the Americans to join the war and invading the west coast of Europe to weaken Hitler’s forces.

In late 1942, Lyudmila Pavlichenko arrived in Washington, D.C. and toured the major cities in the United States. She immediately became a celebrity, but she was not fully understood by the press. During the interviews, she was asked if women soldiers could wear lipstick or if the fact that the uniform was making her look fat was an issue for her.

Pavlichenko also became an intimate friend of the First Lady, Eleanor Roosevelt, which then decided to accompany the Russian sniper on a speaking tour. Despite Pavlichenko’s poor English, it did not deter their friendship to blossom.

Lady Death: Back to Reality

When Pavlichenko finished her tour, she went back to the Soviet Union, to train young recruits of the Red Army. She also graduated from Kyiv University and finally became a historian. The First Lady and Lady Death carried on their correspondence, and in 1957 Mrs Roosevelt visited her friend in her apartment in Moscow. That day was then described by Pavlichenko herself, which recalled making excuses to her Soviet minder in order to be alone with her friend. The two women spent the whole afternoon together and reminisced about their past experiences in the United States.

Even though the war was over, Pavlichenko was still fighting. She was fighting against alcoholism and what we can now call PTSD. She died in 1974, at the age of 58. Pavlichenko is still considered the deadliest female sniper in history and she earned the Order of Lenin twice, one of the highest decorations bestowed by the Soviet Union, and also the title of “Hero of the Soviet Union”.