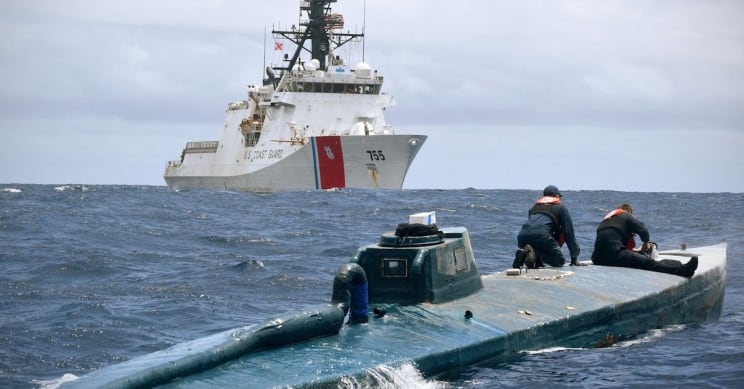 Narco-submarines, tunnels, narco-planes, or mules have been employed by Drug Trafficking Organisations (DTO) and Cartels since the 1980s.

The rise in the use of ‘narco-submarines’ since 1993 has been followed by a rise in narco-submarine seizures by law enforcement.  With increasing efforts from law-enforcement to detect drug-trafficking flows, cartels have adapted their transportation methodology while maintaining elements of corruption and extortion:

Why Is This Important?

Traditional drug-trafficking methodologies like mules or low-altitude planes to transport the drugs from South America are increasingly monitored by law-enforcement. Although the use of submarine-like methods of transport is not new and dates back to 1993, there has been a sufficient evolution to pose a threat to law enforcement.

Reports of submersible vessels and disguised water transport for drug trafficking, particularly cocaine, have been reported around South America as well as on the coasts of Spain and Italy. In 2019, a long-range Low-Profile Vessel (LPV) was detected in Galicia, northern Spain after originating from Guyana. Reports have emerged in Ecuador, Brazil, Mexico, or Venezuela, highlighting a likely spread of this method which is not solely constrained to Colombia.

Narco-submarines are in their majority divided between submersible and low-attention-drawing vessels. Produced with steel or fiberglass and largely in slender shape, the majority of ‘narco-submarines’ used by cartels are Low-Profile Vessels (LPV) and not fully submersible despite having minimal exposure on the water surface. Despite this majority, Fully-Submersible Vessels (FSV), both electric and diesel-powered, have been reported, as well as Unmanned Surface Vessels (USV).

LPV’s use Air Independent Propulsion (AIP) or external diesel-run engines, maintaining a snorkel always on the surface which inhibits complete submersion. FSV’s are either propelled by electric or diesel engines, although the latter has only been reported twice and have higher operational and maintenance costs. USV’s use a common diesel-powered vessel as their lack of crew allows it to decrease its low-profile characteristic. LPV’s crew size ranges from 1 to 3 people, and while the average cargo hold is 1.6 tonnes of narcotics, larger LPV’s and SFV’s have the capability to carry up to 10 tonnes of narcotics.

USV’s, although reported firstly in 2019 on the coast of Italy and only carrying 37 Kg of cannabis, the autonomous nature of the water-borne vehicle, is likely to be invested in and expanded in capabilities, since it gives an opportunity for DTO’s and cartels to avoid reducing recruitment size due to potential arrests. Nevertheless, the evolution of narco-submarines from 1993 to 2020 indicates that USV’s are unlikely to significantly develop in the short-term.

The current capabilities of LPV’s far outweigh those of FSV’s and USV’s. LPV’s have reportedly travelled trans-Atlantic routes from Guyana to Spain as they are powered in their majority by air propulsion with snorkels. Electric-powered FSV’s in contrast have a limited travel range, needing to be towed by a larger vessel, and diesel-powered FSV’s are likely too costly for DTOs to set these as the preferred methodology. Considering the estimated $1.5 million cost of electric submarines and their limited capabilities, it is unlikely that diesel-powered transport has been prioritised as costs would likely sky-rocket, as would law-enforcement efforts at interdiction. USV’s, although attractive due to their autonomy, were seized travelling short distances from Albania to Italy, indicating a lack of capability of this methodology to carry out long-range shipping routes.

The point of origin of most narco-submarines are likely improvised shipyards within Colombia’s inner rivers. Although similar to the production of cocaine these are difficult to detect, Colombian authorities have highly likely been attracted to target the shipyards apart from in-travel detentions. The artisan nature of the vessels and submarines, despite the large financial capabilities of cartels, indicates a limited capability of DTO’s to technologically and structurally expand in the build of these transport methods. While LPV’s are capable of routinely transporting drugs considering the over 40 reported narco-submarine incidents in 2019.

Stealth is a common theme amongst types of narco-submarines, and can highly likely enable cartels and DTO’s to employ this methodology in areas where corruption indicators are lower. Mexican or Brazilian cartels that control ports partly through corruption have the opportunity to avoid the need of infiltrating a government like in Guinea-Bissau or Cape Verde. The low-detectability asset of such transport likely enables drug-trafficking in highly-policed areas with a decreased risk of seizure or interdiction. Considering the time difference between seizures by Spanish police in Vigo in 2006 and in Galicia in 2019, it is highly likely that the method, although not as common in Spain, has had successfully employed avoiding a majority of law-enforcement efforts.

H I Sutton, an expert in underwater naval warfare and narco-submarines, argues that LPV’s are likely too successful currently for cartels to continue to innovate in methodologies. While admitting the existence of FSV’s and their attractiveness, he argues that current low-costs of LPV’s still hold greater importance than stealth capabilities considering the rate of interdiction by law enforcement and the operating costs of FSV’s. Integrated GPS systems as well as radar-detection systems demonstrate that LPV’s have highly likely evolved within their typology rather than shift to a higher presence of FSV’s. Consequently, it is likely that building capacity in less-monitored regions in South America such as Brazil’s north-western Amazon region will be prioritised to support artisan shipyards in Colombia.