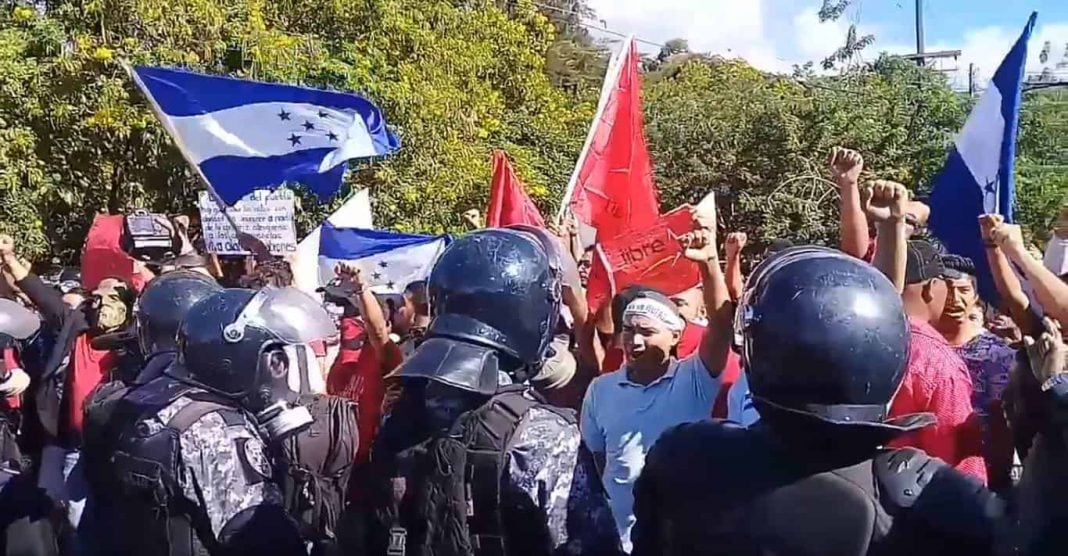 On 26 April 2019, Honduras was again shaken by growing strikes and protests that are becoming increasingly more frequent. The latest were in response to legislation that accelerates budget cuts and the privatization of public education and the healthcare system. The protest was called by teacher unions and the Honduran Medical Association. Tens of thousands hit the streets in what is widely seen as growing discontent against the government of Juan Orlando Hernández (known as JOH). JOH leads the conservative National Party that came to power after a military coup deposed of Manuel Zelaya in 2009.

“They don’t understand the law”

The protests and strikes launched on 26 April were joined by thousands in other major cities of Honduras. On 29 April, protesters blocked a border crossing with Nicaragua but were violently removed. JOH’s allies rejected the claim of protestors that the bills would privatize services or would lead to mass layoffs. “Those who are protesting don’t understand or don’t want to understand the law,” said Mauricio Oliva, the president of Congress. The government claims the reforms will save the system more than $300 million.

The protests turned violent when anti-riot police fired tear gas and protestors responded with Molotov cocktails. At least four buildings were set on fire, including the Tegucigalpa mayor’s office. Dozens of demonstrators were reported injured and 10 detained. Coinciding with the violent confrontations, Amnesty International reported several attacks against human rights defenders who had intervened in the detention of demonstrators and others not involved in the protests. Amnesty also reported that the headquarters of the Committee of Relatives of Detained and Disappeared Persons in Honduras (COFADEH) was tear-gassed after demonstrators tried to take refuge there.”

On April 27, the protestors claimed victory, at least for now, as the Honduran Congress announced it will suspend the ratification of the reforms. “We have decided to suspend and archive those laws and to invite dialogue with the leaders of the health and teaching associations, with the aim of bringing peace,” Mauricio Oliva, told local media. The invitation of dialogue was accepted by leaders of the teachers and medical unions. However, the pressure on the government will continue as roadblocks around the country are expected to remain.

The anger in Honduras has been simmering for years over corruption, violence, and generally a state indifferent to the needs of its people. Many consider their government and president as illegitimate after retaining power is delayed and allegedly fraudulent elections in 2017. During the recent protests, many of the demonstrators also demanded the resignation of JOH.

These latest demonstrations followed protests on 5 April where thousands of people marched in the capital Tegucigalpa similarly demanding his resignation. Protestors from the so-called Movimiento Indignados (Indignant Movement) and shouted “get out J.O.H.” “We demand the immediate removal of Juan Orlando Hernandez from the post he is currently usurping, as well as an urgent investigation of him and his family circle and political associates,” the movement said in a statement. Allegedly JOH is accused of corruption and drug trafficking. His brother Antonio Hernandez was arrested in Miami on 23 Nov 2018 for drug trafficking.

The social and economic decay of Honduras over the last ten years has only fueled the migrant and refugee wave leaving north for Mexico and the U.S. After the 2009 coup, the violence by gangs and organized crime catapulted the country to the status of the world’s most violent country, a position it held until 2014. The homicide rate has since declined, but it still remains extraordinarily high. By 2012, estimations were that 80% of the cocaine bound for the US from South America passed through Honduras.

The state also came down with a heavy hand on civil society. Between 2009 and 2015, the Inter-American Commission on Human Rights (IACHR) issued 41 protective measures for hundreds of union workers, lawyers and LGBT, environmental and indigenous activists who were facing imminent risks. This number was only surpassed by Colombia and Mexico at the time. This combined with a reoccurring drought has led to a powder-keg situation. At a 1 May rally, deposed President Zelaya said, “the revolution is inevitable in Honduras: to remove tyranny, the dictator, and the system of the dictatorship that oppresses us.” A revolution may be uncertain, but the people of Honduras seem primed for a change and continue to protest.