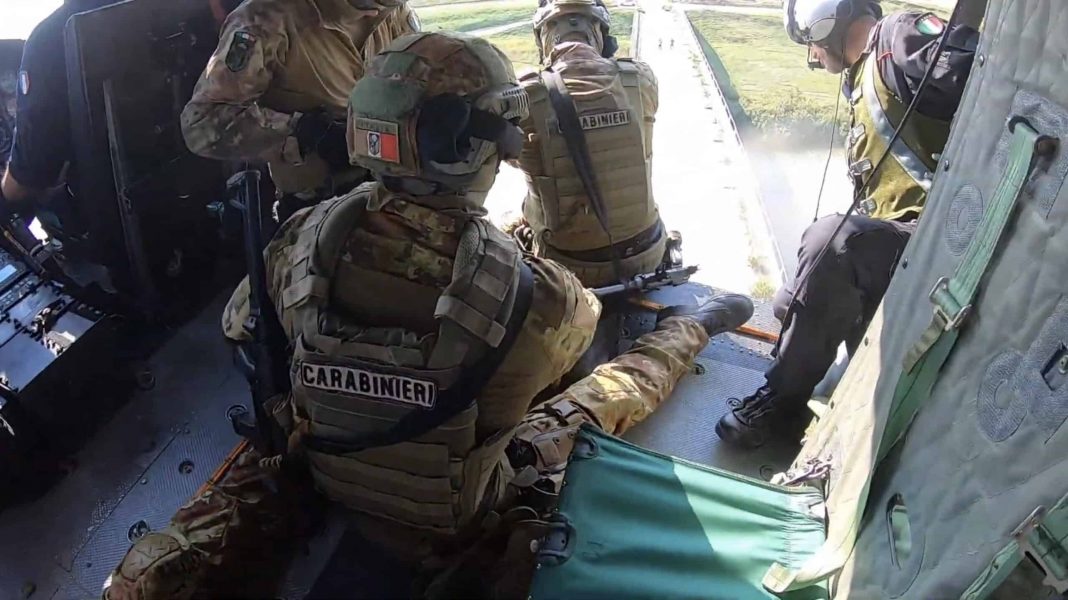 The 1st Carabinieri Paratroopers Regiment “Tuscania” is a military unit of the Italian Carabinieri. This unit comprises paratroopers, and it is based in the Vannucci Barracks, in Livorno.

This unit is part of the 2nd Carabinieri Mobile Brigade and it comprises around 550 personnel. Since November 2019, Colonel Salvatore Demontis is the commanding officer of this special unit.

The Carabinieri are the national military police force in Italy. They both have civil and military responsibilities and they are controlled by the Italian Ministry of Defence.

On the 1st of July 1940, the Ministry of Defence established the 1st Royal Carabinieri Paratroopers Battalion. The first commander of the battalion was Major Bruto Bixio Bersanetti.

In 1941, this battalion was first sent to Libya to fight in the battle of Euet el-Asel and perform the counter-commando activity.

The following year, the battalion was disbanded, and the surviving soldiers were sent to different divisions.

It was during these years that “Tuscania” took part in the war against South Tyrolean terrorism.

Within this battalion, consisting of 150 men, there were paratroopers of the “Tuscania” Battalion and Sabatori Battalion, alpine units, and members of the Italian Guard of Finance.

On the 1st of October 1975, the Italian MoD denominated it the 1st Carabinieri Paratroopers Battalion “Tuscania”. Its tasks comprehend both paratrooper and police duties, often aimed at the fight against terrorism and organised crime.

Within the 1980s, the Battalion took part in various missions in Lebanon and Somalia, to guarantee the security and protection respectively for the Palestinian refugee camps in Beirut and the Italian Embassy in Mogadishu.

On the 5th of November, the Italian Army awarded the 1st Carabinieri Paratroopers Battalion “Tuscania” a silver Medal for Army Valor for its actions in Somalia.

In 1996, a third company was added to the battalion, and on the 1st of June “Tuscania” was designated as Regiment, becoming consequently the 1st Carabinieri Paratroopers Regiment “Tuscania”.

The 1st Carabinieri Paratroopers Regiment “Tuscania” is structured on:

All “Tuscania” personnel, around 550 individuals, is operative, and consequently, all the members of the Regiment go on a mission in rotation.

The 1st Carabinieri Paratroopers Regiment “Tuscania” can deploy a battalion with three different operational Companies. The first specialises in amphibious warfare, the second in mountain warfare, and the third one in HALO. HALO is an acronym that stands for High Altitude Low Open and it refers to a parachute launch technique. The military mainly uses this technique to infiltrate enemy areas without being notices.

“Tuscania” personnel focuses on tasks related to the military field, and especially the paratroopers one. The Italian MoD usually employs this regiment in the following situations:

Since this unit is extremely flexible, it also has to perform police and training duties, such as the protection of political figures in hostile areas and the support to the Italian local authorities. The local authorities mainly requests the support of “Tuscania” when they have to cover a vast area or when a fugitive knows the area well. Most of the time, this is due to the presence of an organised crime group.

The “Tuscania” also carries out activities related to counterterrorism, by providing tactical support to the GIS. The GIS (Gruppo di Intervento Speciale) is a special section of the Carabinieri, mainly focused on the fight against terrorism.

Due to the flexibility and the unit being widely employed, the personnel of the “Tuscania” goes through a long and challenging vocational training path. Only one-third of the participants usually complete this training.

After passing the psychophysical test, the candidates are admitted to a training course that lasts nine months. This training comprehends:

After passing the course and the final test, the candidate passes in Battalion, where he/she has to undergo another training. This specialised training comprises:

In order to perform its varied tasks, “Tuscania” has access to numerous and various special equipment and has a well-supplied armoury.

Except for certain operators, most of the “Tuscania” personnel carries the same weapon as the Carabinieri, which is the Beretta 92FS.

Regarding long-range weapons, the “Tuscania” Regiment carries the M4 Bushmaster assault rifle. It is characterised by a folding front sight, and it can be equipped with the M203, a single shot 40mm under-barrel grenade launcher. The Beretta SCP-70/90 is only employed by the new candidates during training sessions.

Concerning short-range weapons, in addition to the Beretta 92FS, the “Tuscania” personnel uses the Glock 17 and Glock 19.

The “Tuscania” took part in the most important operations abroad of the Italian Armed Forces. The first one was in Lebanon, from 1982 to 1984. It was a peacekeeping operation, and it also was the first international mission in which Italy took part after WWII.

In the first years of the 1990s, the Ministry of Defence sent “Tuscania” to Somalia more than once. Between August 1989 and November 1991, “Tuscania” took part in three missions to defend the Italian embassy, due to the outburst of the civil war. Between December 1992 and March 1994, “Tuscania” went back to Somalia as part of the international operation “Restore Hope” and it took part in many high-risk operations.

In January 1996, “Tuscania” went to Bosnia Herzegovina as part of the NATO international operation IFOR (Implementation Force). It fulfilled tactical, recon, security and protection tasks and it was the intermediary between the local police and the International Police Task Force.

Following the fall of Saddam Hussein’s regime, the UN approved a mission to bring stability to Iraq. From June 2003, Italy took part in the UN mission with operation “Antica Babilonia” in Nasiriyah. “Tuscania” was responsible for managing the public order since the Iraqi police had dissolved, and for training the new local police forces.

Since its creation, Regiment “Tuscania” has been responsible for the security of Italian embassies in high-risk countries, such as Afghanistan, Algeria, Congo, Israel, Iraq, Libya, Pakistan, Somalia, and Zaire.

After the 9/11 attack and the fall of the Taliban regime, “Tuscania” personnel was the first Italian Regiment to land in Afghanistan. Its task was to reopen the Italian embassy and guarantee the safety of its officers and staff.

Moreover, it had to assist and mentor the new local forces and consequently training them.

Their mission in Afghanistan and Kabul came to an end on the 27th of August 2021.

Due to the withdrawal of the American troops and the military actions taken by the Taliban, there was a worsening in the living conditions and security of the country, and consequently of the civilian and military personnel.

The Italian mission was to evacuate the Afghani population that cooperated with Italy, and their families, Italian diplomatic personnel, and all the Italian people that were still in the country.

In June 2021, the MoD carried out the first evacuation mission, the so-called Operazione Aquila 1, and the Italian forces flew out 228 Afghans to Italy.

Following the loss of the Afghan Armed Forces against the Taliban, the situation worsened, and a second intervention was needed.

With Operazione Aquila 2, an Italian special force was able to evacuate and fly to Italy 391 interpreters.

But Operazione Aquila 2 was not the last. Many civilians and diplomatic staff were still in danger in Afghanistan, mainly in Kabul.

Between the 13th and 27th of August 2021, the Italian Ministry of Defence carried out Operation Aquila Omnia.

The Italian Forces rescued 5011 people, of which 4890 Afghans. The Italian Army and “Tuscania” managed with 87 flights to first bring these people from Hamid Karzai International Airport in Kabul to the Italian military base of Al Salem, in Kuwait, and secondly from Kuwait to Fiumicino Airport in Rome, Italy.

During one of the last evacuation attempts, the “Tuscania” personnel run into the crowd, in order to retrieve and save some Afghans that collaborated with the Italian staff.

In the last flight, the “Tuscania” Regiment was able to protect and rescue the Italian console Tommaso Claudi and the ambassador Stefano Pontecorvo.

The 1st Carabinieri Paratroopers Regiment “Tuscania” is an extremely flexible unit with both police and military functions. Since its creation, it keeps representing a successful unit able to intervene on both national and international ground in any kind of operation.