Guinea: The Struggle Against Third Termism 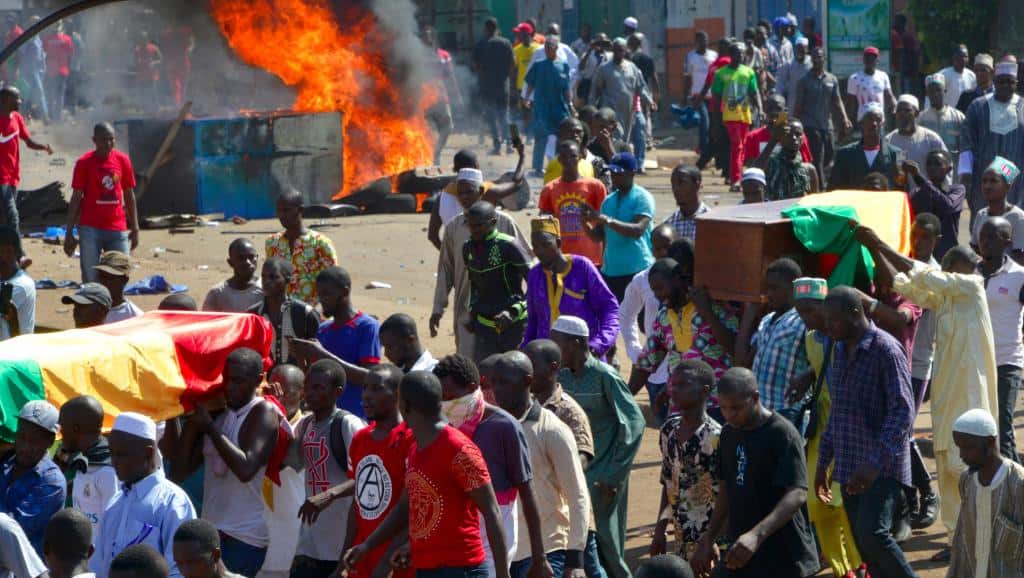 In Africa, a new political trend is arising. Many former colonies witnessed both democracy and authoritarian rule after gaining their independence. As for now, democratically elected heads of state seek to prolong their rule, by amending or even renewing the constitution. This wave of what critics call “third-termism” brings about increasing tensions across the African continent.

Guinea is one of Africa’s smallest countries and is located on the West Coast, opening its shores to the gulf that wears its name. In terms of resources, Guinea is one of the richest among its neighbours, with large reserves of iron ore, gold, and uranium. Despite this, the country’s population struggles with severe poverty for years. In 2014, Ebola broke out in Southern Guinea, expanding also to Sierra Leone and Liberia. Fatalities are estimated at eleven thousand and three hundred.

With respect to politics, Guinea gained its independence from France in 1958 and since then the country was ruled by a military dictatorship. In 2010, president Alpha Conde won the elections and progress in the democratization of Guinea was made. He is the first democratically elected leader. But the country seems to be returning to its political roots, with Conde willing to seize the power for at least another term. In Guinea, the president cannot serve for more than two terms and by 2020, the 81-year-old ruler will be expected to leave the office.

Conde’s political moves have generated violent protests across Guinea, pushing the country’s stability to the brink. Opposition parties accuse Conde of orchestrating a change in the country’s constitution which would allow him to run for at least another two terms. Alongside civil organisations and trade unions rejecting the idea of modifying the constitution, these parties have formed the National Front for the Defense of the Constitution (FNDC). Driven by numerous public accusations made by the FNDC as well as a stalling economy depriving people of a decent living standard, thousands took over the streets to express their anxiety over Conde’s intent. Some of the protesters declared for local journalists that Conde’s ten-year rule was enough and that Guinea is ready for a new leader capable of delivering improved living conditions.

Further protests were caused by the death of several demonstrators. Security troops stated they started to use force after protesters threw stones at them. Between October and November alone, twenty people were shot dead by the police. Many others have been arrested and detained, including journalists. The protests started in mid-October and the next one is scheduled for December, the 26th.The government depicts the protestants as a threat to national security. However, opponents believe the arrests represent a tool for oppressing the freedom of speech and silencing the criticism towards the current administration. The temporary release of members of the opposition might only represent a response for the criticism received from the US House Foreign Affairs Subcommittee on Africa. Arrests are highly likely to continue, while an increasing number of casualties might occur given the violent nature of the struggle between protesters and the security forces.

The phenomenon of “third-termism” did not occur in Guinea only. In fact, it is engulfing the political landscape of many member states of the African Union. One such example is Egypt, where the president (Abdel Fattah el-Sisi) is also the chair of the organisation. In April 2019, Sisi proceeded with the amendment of the constitution so that he can run for the presidential office until 2030. Despite constitutions being amended or renewed across the continent, the African Union stays silent in the face of events paving the way for illiberalism. There is a legal framework aimed at impeding the member states to undermine the democratic principles and by adhering to the African Union, countries automatically conform with it. The African Charter on Democracy, Elections, and Governance forbids any amendment or revision of the constitution or legal instruments that constitute “an infringement on the principles of democratic change of government”. The same prohibition is also laid down in the 2010 Constitution of Guinea, which specifically limits the president’s mandate to two five-year terms and rejects any revision of the number of mandates.

The Will of the People of Guinea

The stark unrest witnessed by the Guinean society since mid-October determined Congress member Karen Bass, Chair of the House Foreign Affairs Subcommittee on Africa, to issue a statement condemning the violent clashes between security forces and civilians, as well as President Alpha Conde’s announced decision to seek a third term. With this statement, the US House of Representatives urges the government of Guinea “to adhere to the will of the people and honor the county’s constitutional term limits.” Following this statement, the Guinean court in Conakry agreed to temporarily release a group of 10 opposition leaders from jail, as they wait for the start of their appeal. The arrests are based on accusations of staging protests against the government. Protesters fear that the Conde administration will turn Guinea into a dictatorship, with repressive measures already being adopted.

The increased use of repressive measures coincides with Guinea’s signing of a new contract with Société Minière de Boké-Winning Africa (SMB-WAP), which offered $14bn to develop an iron ore project. The company is already mining bauxite in Guinea’s Boké region, then transporting it to China. Mines minister Abdoulaye Magassouba stated that the Transguineen project – a railroad project in the country that would create routes for export – was pivotal in the decision to grant the iron ore blocks to the Chinese-backed consortium for development. As most of the African states, Guinea is choosing China over other potential investors such as Australia, due to China’s ability to build infrastructure in a timely manner. It is interesting to observe the parallel between Africa’s leaning on China’s giant economy and the gradual shift to illiberalism. It is yet to determine whether there is a link between the two or that the African leaders are simply following the wave of “national determination” that takes over the international community.