Somali-Kenya relations cracked but not broken 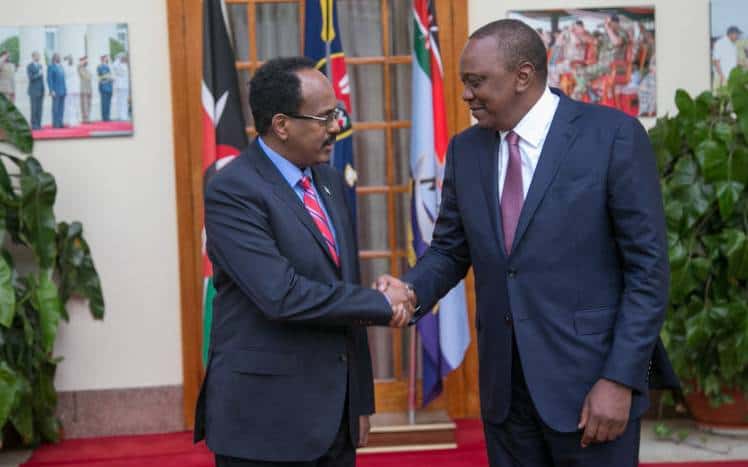 The International Court of Justice (ICJ) has postponed a hearing first raised by Somalia in 2014, over a Somalia Kenya maritime dispute concerning an approximately 100,000 square kilometre area in the Indian Ocean until June 8, 2020. Both countries lay claim to the area which is thought to be rich in oil and gas resources. This dispute had caused rising tensions between the two East African nations, with flights cancelled between Mogadishu and Nairobi, rejections of visas for Somalian MPs and cabinet ministers on diplomatic passports, and even a threat to deploy Kenyan Defence Forces (KDF) to the maritime border to protect ‘sovereignty’ over the disputed area. Somalian officials stated that such military activity would be met with reactionary troop deployment.

Will the ICJ solve the problem?

After a meeting, President Uhuru Kenyatta of Kenya and President Mohamed Abdullahi Farmajo of Somalia, have agreed to normalize bilateral relations after the concerning deterioration. Direct flights have been reinitiated between Mogadishu and Nairobi, and visas have been agreed to be issued on arrival. Both nations await the decision that will come from the ICJ in 2020, and hopes are that the decision will be final and binding.

The ICJ decision cannot be enforced by the ICJ itself, meaning that it will rely on the two nations to accept the ruling. Kenya has previously insisted on settling the dispute through negotiations between the two rather than through the ICJ. This has been rejected by Somalia, and for good reason, considering they would have a weaker negotiating position compared to Kenya. Kenya would have a key bargaining tool over Somalia due to their contribution of 4,000 KDF troops to the African Union Mission in Somali (AMISOM).

Kenya also has significant regional influence which would further weaken Somalia’s negotiating position if the case was not heard through the United Nations ICJ, which in theory will have a considerably fairer and neutral position. These developments come amid warnings from the International Monetary Fund (IMF) to Kenya concerning a rise in debt, defaulting on loan repayments and an economic slowdown.

With 2022 elections on the horizon, this provides an unpredictable forecast for Kenya. 2020 in Somalia will witness the first popular elections since 1969, President Farmajo may likely have been seeking to gain favourable public opinion by taking a strong stance on the maritime dispute. The Kenya Vision 2030 has increased demands for Kenya to generate more energy at a lower cost, the focus should be on renewable energy and not over the oil and gas reserves, in theory. If the ICJ ruling is in favour of Somalia, it would be in Kenya’s interest to appease the international community and respect the decision. Kenya is seeking credit and economic growth, adding to instability in the region will not benefit either side.

In the short and long term, Kenya and Somalia would benefit from cooperation rather than an adversarial approach, which not only has economic implications, but threatens security for both nations by inadvertently producing potential opportunities and benefits for Al-Shabaab. There are approximately 2.4 million Somalis in Kenya, from a business perspective, unhindered travel and market access between the two nations should entail economic and cultural benefits.

The terror group Al-Shabaab have already used the dispute with Kenya as propaganda against ‘foreign invasion’. The KDF play an important role in the conflict with Al-Shabaab, the main concentration of troops being stationed in Jubaland, where Al-Shabaab has its last significant presence. The KDF also operates in a support role, by training the Somali National Army, and set to complete the training mission objectives by 2021. If the normalization of relationship does not last, this will most likely see the early end to this mission. This breakdown of the Kenyan-Somali security relationship would certainly be a negative for the safety of both nations. Al-Shabaab’s terror attacks on Kenya severely affected their tourism revenue and pose a direct security threat to Kenya. Al-Shabaab success in Somalia translates to a greater security threat against Kenya.

The time leading up to the June 2020 ICJ ruling offers a chance for both nations to improve bilateral relations. There is a considerable risk that the ruling will have reverberating consequences for the region. A Kenyan victory would create further propaganda opportunities for Al-Shabaab, while a Somali victory could possibly cause Kenya to dispute its maritime border with Tanzania. A satisfactory solution over the territory is not only needed for stability for both nations, but for the East Africa region. The annual African Economic Outlook (AEO) report, places East Africa as the fastest growing region, forecasted to reach 5.9 percent in 2019, and 6.1 percent in 2020. Somali-Kenya relations must continue to normalize to provide stability for the region, not only economically, but to counter the existing terror threat.